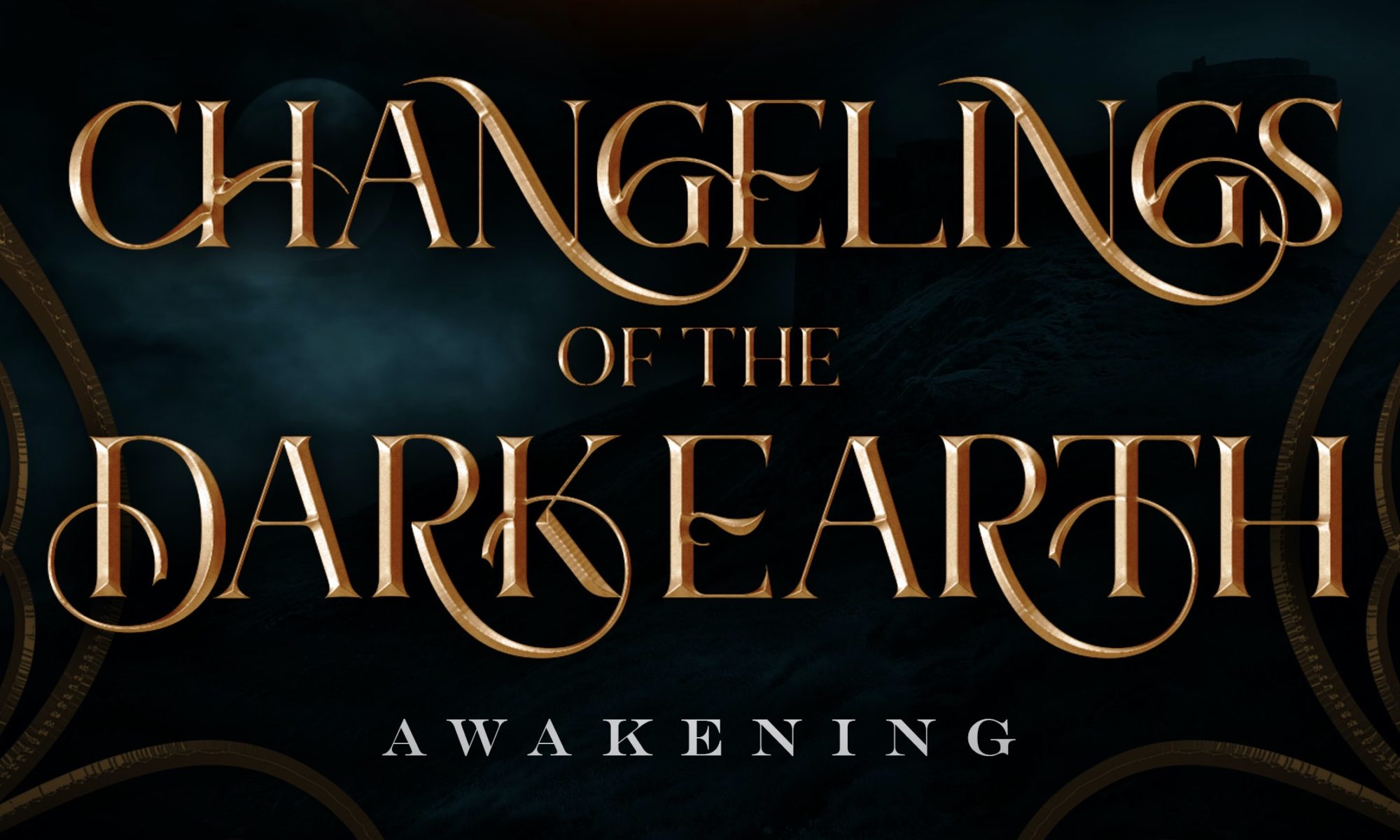 With less than a week to go before Changelings of the Dark Earth: Awakening is available on Amazon, it’s still a little unreal to me that this project so close to reaching the finish line. I want to give a bit more backstory into how it came about, but before I go any further, be sure to check out my previous post, which contains a sneak peak at the book’s first chapter (And if you want to set the right mood, you can listen to a customized Spotify playlist while you’re reading).

You can also preorder a copy of the ebook ahead of the May 1 release here.

Okay, with all that promotional stuff out of the way, let’s dive into some history.

As I’ve mentioned previously, Changelings got its start as a roleplaying game. I got into RPGs as a teenager and spent a lot of time playing a game by FASA Corporation called Earthdawn. It was a fantasy world with a somewhat apocalyptic vibe. The basic concept was that the world had suffered a magical cataclysm and everyone had been forced to take shelter in magically sealed underground dwellings. Players assumed the role of heroes who possessed a natural affinity for magic and followed a specific philosophical/spiritual path that affected how they channeled that power and how they looked at the world around them. The game typically assumed that players had recently emerged from hiding and were setting out to discover the world several centuries after their ancestors had gone into hiding. To give you a modern reference, it was a bit like Dungeons & Dragons crossed with the Fallout games.

Earthdawn was a wonderfully realized setting that felt like a real place due to its high level of internal consistency. The tropes of fantasy RPGs, such as delving into ancient dungeons and developing fantastical powers, all had a logic to them that made sense. There were dungeons everywhere because people had been hiding in them for generations while the world above burned. Character classes existed as a real thing in the world because they were the philosophical paths that the characters followed. A D&D character wouldn’t introduce themselves in conversation as a “third level fighter” because that was a purely mechanical concept, but an Earthdawn character could say they were a “third circle warrior” and everyone would understand what they meant. It was like saying you were a second-degree black belt in some martial art.

Anyway, I loved Earthdawn and played a lot of it (you can get the latest edition from FASA Games). The lore and fiction of the game’s setting was always incredibly compelling for me and I knew that someday I wanted to make a game with the same level of depth. I took a few stabs at writing a game, but they were all just knockoff fantasy clones that weren’t all that interesting.

Then I read Changeling: The Dreaming.

One of the last books to appear in White Wolf’s original World of Darkness game line, Changeling: The Dreaming is a very unique game. I was familiar with the World of Darkness because I’d played Vampire: The Masquerade and had a few books for Werewolf: The Apocalypse. Each game in the line took on established archetypes from folklore and built an entire game world and society around each one. Changeling: The Dreaming focused on faeries. The rulebook was gorgeous, full of whimsical, Renaissance-style artwork that looked like concept art from a long-lost Jim Henson movie (and featuring one of my absolute favorite game art pieces by legendary artist Tony DiTerlizzi). When I first saw the game, I was impressed by the production values, but didn’t think much about the concept. After looking through and reading portions of it, I realized there was a lot more to faerie folklore than I thought.

Changeling: The Dreaming is kind of a complicated game to explain in a sentence or two, but two of the main concepts that I found appealing were the existence of multiple different types of faeries and the idea that the forces of human modernity and faerie magic were incompatible forces. One of the primary struggles in Changeling: The Dreaming is fighting against the influence of banality, which is essentially disbelief. Faerie magic (glamour) needs people to believe in it for it to function. As human society embraces a scientific view of the world, the influence and power of the faerie realm fades. In pre-modern times, the belief that a faerie castle could be at the bottom of a nearby lake or that the mountains to the far north are ruled by frost giants was powerful enough that such a thing might be possible. As science and reason took hold, however, those possibilities because far less likely and eroded the influence of magical power.

To be totally honest, I never got to play Changeling: The Dreaming. Something about the game never quite came together for me conceptually. I liked it, but I had a hard time wrapping my brain around how I was supposed to actually run it as an RPG. It was overflowing with amazing ideas, but bringing them together into a coherent, focused game experience was a challenge I never quite solved. Although I’m actually more fond of the later reimagining of the game (Changeling: The Lost), you can still get the original game from Onyx Path Publishing.

What Changeling: The Dreaming did do, however, was get me thinking about how I could combine concepts from it with ideas from Earthdawn to create a fairly unique fantasy setting. I really liked the way Changeling: The Dreaming had multiple different types of faeries, so that eventually led to me ordering a book called The Fairy Tradition in Britain by Lewis Spence. It’s something of an obscure book published in 1948 that provides an academic overview of faerie folklore in the British Isles. Although apparently hard to come by today, I got my hands on an early print-on-demand copy that isn’t much more than photocopied pages bound together with a laminated cover.

I can’t attest to the book’s academic rigor, but it contained a wealth of information that was incredibly valuable as I started fleshing out my concept of how faeries should function in a fantasy RPG. Not only was I able to find the source material for many of the faerie types outlined in Changeling: The Dreaming, but there were also enough references to specific magical power to help me build out clearly defined abilities. It also offered a wealth of lore to draw upon, which allowed me to create a backstory for the game setting. In an effort to mix things up a bit, I incorporated some figures from Greek mythology and mixed them into what was quickly becoming a rather fleshed out game.

All That Work for Nothing…

If you dig back through the old computer files for this early RPG project (known at the time as “Dark Earth”), you’ll find quite a lot of material there. There were pages upon pages upon pages of character abilities and huge entries for each breed of faerie. I’d written enough rules mechanics and character options that you could actually build a character and play the game. But that never quite happened. After getting right up to the precipice of playtesting, however, I decided to set the project aside.

To be honest, the rules sucked. They were a bastardized derivative of games I’d played in the past and didn’t really do anything interesting. While I loved the setting and the flavor I’d created, the game’s rules were a clunky mess. When the third edition of D&D came out and the market was awash with products that took advantage of the open game license (OGL) to utilize and adapt the d20 rules system, I toyed with the idea of creating a d20 version of “Dark Earth” and actually wrote out some classes for it, but I quickly tired of the process and decided it was best to move on to other things.

So “Dark Earth” sat in the depths of my hard drive for the next fifteen years. I tried my hand at making other games with varying degrees of success and eventually focused on writing fiction. After publishing two novels and having a third accepted for publication, I started thinking about a new project. My wife at the time, who has always had good instincts for what I should be working on, kept suggesting that I write something for a younger audience rather than my typical dark fantasy fare. After grumbling about it and resisting, I pitched a few ideas to my hypothetical target market, my 12-year-old daughter.

One of those ideas was a story set in the “Dark Earth” world, only with adolescent protagonists instead of adult characters.

She loved the concept, and so Changelings of the Dark Earth: Awakening got underway.

The End (or the Beginning) of a Long Journey

After a few fits and starts and a prolonged hiatus, I finally finished Changelings in the spring of 2019. While there were some ups and downs to the writing process, I was overjoyed to discover that all that work I did on the “Dark Earth” RPG back in the early 2000s ended up being extremely valuable. That old gaming material quickly became my “setting bible,” outlining in specific terms how different powers worked and what different faerie types were like. I added quite a bit along the way, but it was great having that resource to draw upon.

For me, however, the most important thing about the book is that my daughter loved it. She devoured each chapter as quickly as I could finish it and never stopped hounding me about it when I took a long break from the project in 2018. To be perfectly honest, I might not have finished it had she not been so excited to learn how the story ended.

Of course, there’s an open question about whether or not the story is ended. While Changelings is written as a standalone book that tells a self-contained story, it also sets up the context for subsequent chapters that can explore the Dark Earth in greater detail and reveal more about the characters who inhabit it. There are plenty of notes from the old RPG that never found their way into this book yet are still alluded to in several places. I have some outstanding narrative debts that still need to be paid (namely, the third and final chapter of The Chronicle of Rostogov), but it would be fun to share more of these hidden secrets in the future.

The Wait is Almost Over

For now, however, I’m excited that readers will get to discover the world of the Dark Earth on May 1. Again, you can preorder the ebook copy right now on Amazon or wait for the paperback release on or around the release date. I hope you enjoy Changelings of the Dark Earth: Awakening!